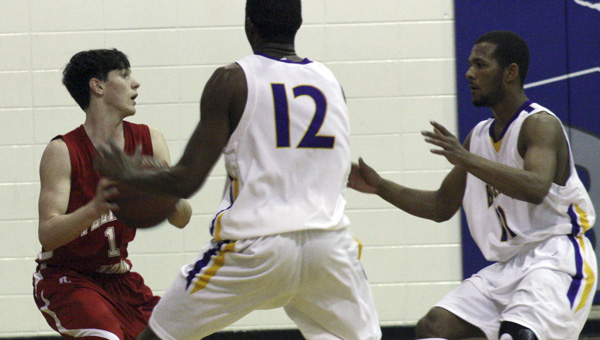 Pleasant Home held Geneva County’s two leading scorers to single digits, and walked away with a 55-41 victory in the Class 1A, Area 2 tournament at Kinston.

PHS coach Jerry Davis said the team switched to a man-to-man defense to shut the Bulldogs down.

“We pretty much shut the two good ones down,” he said.

With this victory, Pleasant Home improves to 19-9 overall, and will face Kinston Monday night at 7 in the area tournament finals.

The last time the Eagles clinched a berth in the sub-regional round was in 2009.

Pleasant Home only made 4-of-9 from the free-throw line in the first half, but that changed in the fourth period.

Geneva County led 16-15 after the first period, and 24-23 at half time. Pleasant Home outscored the Bulldogs 14-7 in the third period.

“It was one of them sloppy ones,” Davis said. “We got a lead in the end, and finally we made some free throws.

“That’s what you’ve got to do in tournament play,” he said. “It wasn’t a smooth game, but the main thing is that we’re still playing. That’s all that matters at this point.”