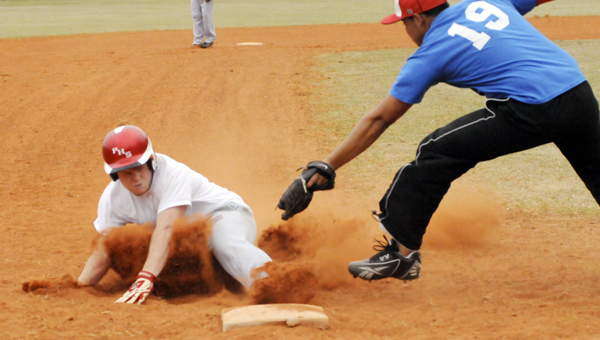 In a few days, Pleasant Home will begin its 2011 baseball season against Red Level.

In a few hours after the first pitch on Tues., March 1, the Eagles will know how they “measure” up, PHS coach Cody McCain said.

McCain, first year head baseball coach, who took the reigns of the program after former coach Bradley Stephens moved to softball, said he’s excited to get a game under the team’s belt.

“I think with everybody else having a first game already, I think our measuring stick is going to be Tuesday against Red Level,” McCain said. “That’ll tell us a little bit about where we are right now, and what we need to improve on.”

Today’s practice signifies the 13th practice the Eagles have had, and the fifth since players from the basketball team arrived.

McCain said Wednesday’s practice was one of the best the team has had.

“I feel a lot better (Wednesday) than I have in the last few days,” he said. “A lot of that is the basketball guys came out here Monday.

“That’s five guys out of that group we have to depend on a lot,” he said.

McCain said he has a pretty good idea of who is going to play where in the infield and outfield.

“A lot of the guys, luckily for us, can play in several different positions,” he said. “Right now, I’m looking for a couple guys that can hopefully start at pitcher.”

As far as area play is concerned, the Eagles will compete in Class 1A, Area 3 with Brantley and McKenzie.

“When we first came out in the first few days of practice we came up with a few team goals,” McCain said. “Our team goal is to win the area, and host the first round playoff game.

“That’s a realistic goal for us,” he said. “After that, if we can make that first round and host, then I like our chances at who we get to play. Then, anything after that is a little extra in the season.”

The first pitch against Red Level is at 4 p.m. next Tuesday.