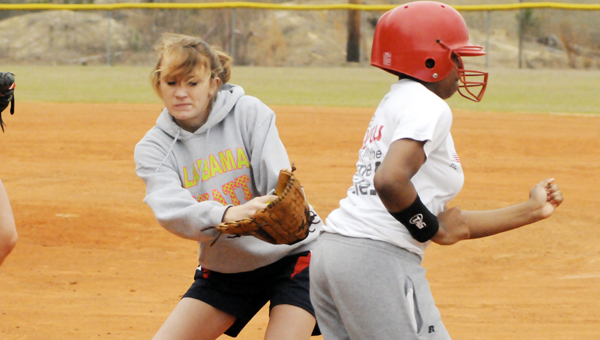 He said the season so far has been good from a coaching stand point.

“I’ve had five (junior varsity) games so far, and it’s helped me kind of get the flow of the game under my belt,” Stephens said. “Softball’s a lot faster, as far being compared to baseball. The innings are a lot quicker — there’s a time limit, different things like that. Pitching, that’s a whole other animal itself.”

Stephens will inherit a team with five seniors, one junior and seven sophomores. The sophomores, along with the seniors and juniors, have made three straight state tournament appearances.

In area play, Pleasant Home will compete in Class 1A, Area 3 with Brantley and McKenzie.

“Last year, Brantley was the one to help get Kinston knocked off in the regional tournament,” Stephens said. “It’s definitely not somebody that we’re overlooking, or we’re thinking it’s already in the bag or anything like that.”

Pleasant Home will begin its area play next Mon., March 7, at McKenzie.

Stephens said he has solidified a few positions on the team, especially on the pitching side of things.

Starting pitchers for the Lady Eagles will be sophomore Emily Byrd, and Brentin Fuller.

As far as season goals are concerned, Stephens said he just wants the team to do what they do best.

“I just want them to do what they’ve done in the past,” he said. “That’s to be expected of these girls, and these girls know that.”

Tomorrow’s contests against Andalusia will start at 3:30 p.m. with the junior varsity squad.

Off to a good start