Something to grow on 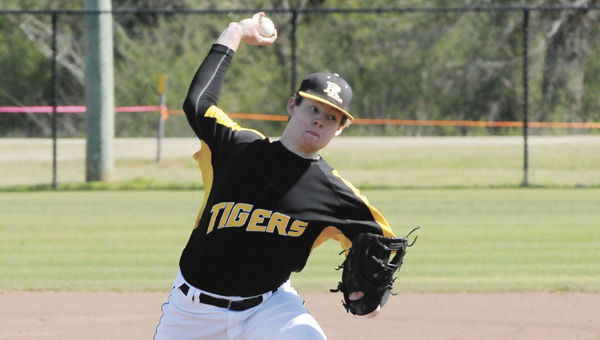 Despite a few “lapses” on the field, Red Level head baseball coach Tony Ingram said his team is getting better.

“I see us doing some things better,” Ingram said. “Our two strike hitting is coming around. The kids just really don’t want to choke up on the bat because they think it takes away from their power. It gives them much more control over the bat.”

The Tigers are coming off an area doubleheader split against Elba Tuesday night. Red Level won the first game 8-0, and fell 11-8 in the second game. A third game will be played to determine who wins the area series.

The Tigers improve to 3-9 overall, and 2-1 in Class 2A, Area 2. Red Level’s game against Florala today has been postponed for unknown reasons, and will be played Mon., March 28.

Ingram said the team always gets in a good position to win the game, but ends up losing because of a lack of “focus.”

“We have lapses where we lose focus,” he said. “In reality, we’re in position every game, whether we were in it, or ahead. We just had a loss of focus. Hopefully, we’ve grown up a little bit.”

Ingram said as of right now, all of his players are becoming more comfortable in their individual positions on the field.

“We’re getting a little bit of consistency (in the field positions),” Ingram said. “The kids know where they’re playing, and where they’re working. That’s the key.”

Red Level’s Troy Nolen picked up the win for the Tigers on the mound.

Nolen struck out eight, allowed one hit and two walks in six innings.

Red Level held an 8-7 lead in the sixth inning, but Elba scored four runs to seal the victory.

“We lost it in the sixth,” Ingram said. “They stole a run, and we weren’t paying attention at home.”

Red Level managed to get two runners on base in the top of the seventh inning.

“We just couldn’t get anything done,” Ingram said.

Red Level was able to allow all of its pitchers to get some time on the mound, Ingram said.

Seven years ago, Kirsten L. Dean was killed in a car wreck, and everybody close to her will never forget... read more