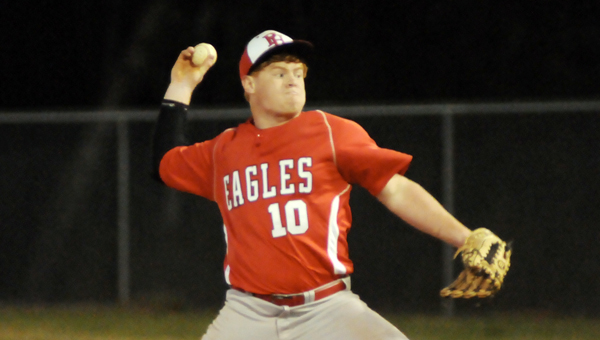 Pleasant Home overcame some team adversity Thursday night, and the Eagles went on to beat McKenzie 5-4 in their first area game of the season.

In the second inning, Pleasant Home’s Sid Newby was struck in the face — just above the cheek bone — after the ball he hit bounced back from in front of home plate.

Newby was taken to a hospital for X-rays. There was no additional information about Newby when the Star-News went to press Thursday night.

Additionally, the Eagles were without five of their starters because each violated team rules, head coach Cody McCain said.

“It’s been a frustrating week for us,” McCain said. “We haven’t played well at all.”

But, overall, McCain said he was “proud” of his team for getting the area win.

“That’s the most proud I’ve been all year,” he said. “They’ve bonded together well.”

Pleasant Home’s Fernando Torres hit the game-winning RBI in a 4-4 ball game to help the Eagles get the win.

The Eagles improve to 3-7 overall, and 1-0 in Class 1A, Area 3, and will travel to play McKenzie in the second game of the area series.

Headland scored five runs in the first inning, and the Rams went on to beat Andalusia 15-4 Thursday night at... read more