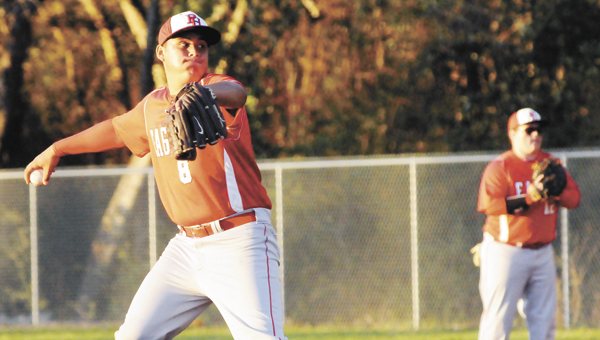 Pleasant Home’s Fernando Torres throw a pitch in an earlier game this season. The Eagles got a playoff berth after Brantley beat McKenzie in its area series. Pleasant Home will travel to play Sweet Water next Friday. | Andrew Garner/Star-News

Pleasant Home overcame some team adversity in its regular season area play, and the Eagles are now set to play in the first round of the Class 1A state playoffs next week.

During their area play this season, the Eagles beat McKenzie and lost to Brantley to finish with a 2-2 area record in Class 1A, Area 3. Pleasant Home was granted a berth in the playoffs when Brantley beat McKenzie in its area series.

The Eagles will travel to play Sweet Water next Fri., April 22. There will be two games played on Friday, and a third on Saturday if there is a split on the first day.

“We went to Brantley, and we had some injuries that were still lingering there,” McCain said. “Brantley has a really solid team. I thought after we played St. Luke’s (Episcopal School) that we might have seen one of the better teams in the state. I think Brantley, pitching wise, was as good as anybody we saw the whole season.

“With McKenzie, we just had to overcome some adversity with ourselves,” he said. “We ended up playing pretty well, but we knew going into the year that Brantley was going to be the key series. We weren’t able to pull that one out from them.”

After the Brantley series, McCain said he got the team together to talk over what needed to be corrected on the team, or what he saw was wrong.

It worked out for the Eagles because the whole last week was dedicated to team improvement, where the seniors practiced on Monday and the underclassmen practice on Tuesday, McCain said.

“We focused on much more individual work, and then by Wednesday, when we got the whole team together, it looked like a whole differnet team than when we played against Brantley,” he said.

Last Saturday, the Eagles traveled to play Cottage Hill Christian Academy in Mobile and split with the Warriors.

“I don’t know what it was, but something clicked last week where we finally actually looked like a baseball team,” McCain said.

When asked if he thought his team was “peaking” right now, McCain said he “hopes so.”

“I would hope that we are peaking at the right time,” he said. “I know that everybody, team wise and coaching wise, and all the fans that came down to support us at Cottage Hill, were encouraged with what they saw.”

Pleasant Home will come back after spring break, and play host to Highland Home next Mon., April 18 at 5 p.m.

Straughn racked up 19 hits, and beat Carroll-Ozark 14-9 Monday night at SHS. The Tigers scored three runs in the... read more