RLS to vie for playoff berth 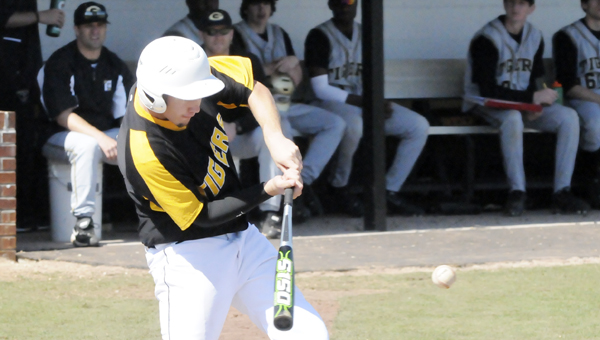 Red Level will play New Brockton tonight for a chance to get a berth in the playoffs. | File photo

Red Level is in full control of its playoff destiny as the Tigers play host to New Brockton tonight in a key area match up.

RLS fell to 4-3 in the area after a close 4-3 loss to Samson Monday night. Red Level and Samson battled all the way until the eighth inning, where the game was tied 3-3. Samson hit a walk off home run to win the game.

RLS head baseball coach Tony Ingram said the main key in tonight’s area match up will be to take advantage of scoring opportunities.

“We had bases loaded, men on second and third, and it was always two outs before we got anything going,” Ingram said about Monday night. “You can’t wait until two outs to get anything going because one out will do it for you.”

Red Level is playing a New Brockton team that has a 1-6 area record. The Tigers need to win the first game tonight to make the playoffs.

Ingram said he’s not taking anything for granted given New Brockton’s record, and is viewing tonight’s game as the start of a new area season.

“That’s the way you’ve got to look at it,” Ingram said. “(New Brockton) can put us out of it, and in contention real quick. If we come out flat, and not focused on what the job is at hand, then we’ll get to be at home while everybody else is playing.”

Ingram added that holding two area games during the same week as spring break wasn’t the best idea, but the players seem focused on the task at hand.

“I think they know the magnitude of the game,” he said. “It’s win and we’re in, and lose, you really don’t know.

The first pitch tonight in Red Level is slated for 4 p.m.

Swimming fanatics, dust off your swim suits because the 2011 Stingrays will be holding registration from Mon., April 18, until... read more