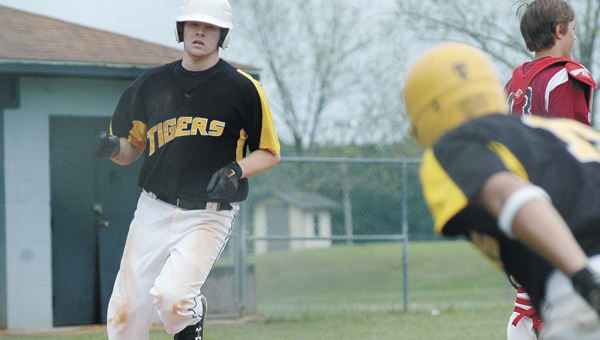 Red Level seniors Nick Nolen and Richard Chauvin know exactly what they must do to help lead the Tigers to a Class 2A first round playoff victory over Flomaton at Hurricane Park today.

“We know that this is it,” Nick said. “We have to go out, and look at this as our last game, especially for our seniors.

“We have to come out intense. We have to get on them quick,” he said. “We just have to be sound, and execute plays and be focused.”

The first round of the playoffs will be played in the best of three games. Today, there will be two games played, and one game on Saturday if needed. The Saturday game is needed only if there is split on the first day.

Red Level will start Troy Nolen on the mound for the Tigers in the first game.

RLS head baseball coach Tony Ingram said by starting his best pitcher the likelihood of getting a win is better.

“I approach these series every which way you can,” Ingram said. “I’m going after that first one because if you can get that first one, you get a boost of confidence.”

During regular season area play, Red Level lost a close game to Samson, in which Troy didn’t start on the mound for the Tigers.

That one game has taught the team that they can play against any opponent without their best on the mound, Ingram said.

“We lost that one, but we played baseball,” Nick said. “I think that game really showed that we have what it takes to go all the way if we want to.

“In that game we were sound,” he said. “It came down to that last pitch. That’s the game where everything went well.”

Chauvin agreed with his teammate, and said the team needs to play together to win today.

“We’re just coming together to get ready,” Richard said.

The last time Red Level played in the post season was in 2008. The Tigers, at that time, were known for making consecutive appearances in the playoffs, Ingram said.

This year, Red Level didn’t get off to the best of starts.

Ingram said despite the slow start, he knew the team was capable of getting in the playoffs.

“I knew the potential was there,” Ingram said. “We were two to three games in the season basically knowing ourselves. Each individual game, we were in a position to win except for maybe two that we were just completely out of it. If you play like that, then you’ve got a shot.”

Ingram said Nolen and Chauvin have been great examples on the field for the team, and that he’s glad to have them lead the Tigers in the playoffs today.

“These two guys who are seniors, they know what’s at stake,” he said. “They know it’s one and done. At the same note, they know everybody’s record is the same right now.

“They are seniors, but bigger than that, these two guys right here are really what this game is supposed to be about because both of these guys have played every spot on the field. To me, that’s what this game is all about.”

When it all comes down to getting on the field for the games today, Nolen said the team will be ready to play.

“I think when we get out there and put our uniforms on, we’re ready to win,” Nolen said.

SHS girls fall to No. 7, boys still at top

Straughn’s Lady Tigers fell to No. 7 in the latest Alabama Sports Writers Association poll that was released today. The... read more