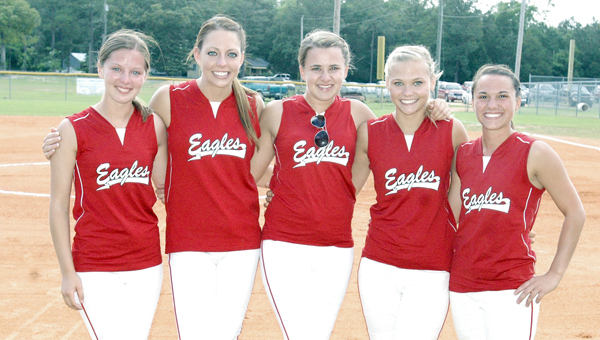 Going to the state softball tournament is nothing new for Pleasant Home’s five seniors.

That’s why Brentin Fuller, Megan Cook, Kaitlin Brookshire, Kat Dozier and Robyn Weaver hope to bring home a Class 1A state championship this week at the state tournament in Montgomery.

“It would be the best graduation present ever,” Cook said.

“It would probably mean the world to me,” Weaver said.

In combined state tournament appearances, all five seniors have 13 years worth of experience.

Cook and Dozier have been six years combined; Weaver and Brookshire have been a combined five years; and Fuller will make her second appearance.

The Lady Eagles head into the double elimination tournament to face Waterloo in the first game at 10:30 Friday morning.

The last time Pleasant Home played the Lady Cougars was about 2004 or 2005.

When asked what the team must do well in order to succeed this weekend, all said “defense” will be a big key.

“We’re going to have to be on our best game,” Weaver said.

For Fuller, commanding the game from the mound is a top priority for the pitcher.

“We have to pitch good and hit good,” Fuller said.

After falling to Kinston in the South Regional Tournament finals last weekend in Gulf Shores, the Lady Eagles have been working primarily on defense, head coach Bradley Stephens said.

“One or the other lacks when that happens,” he said. “With that, we’ve been really pushing a lot more on defense. During the regional tournament, we struggled defensively.”

When Pleasant Home dueled in a 12-inning bout with Kinston at the regional tournament — its rival in every sport, the seniors said — late errors advanced the Lady Bulldogs in the winner’s bracket, and dropped the Lady Eagles to the loser’s bracket.

Now when they play somebody else, they always will think it will be Kinston, the seniors said.

“When we play Kinston, that’s the one we focus on,” Brookshire said. “We have to act like every team we play is Kinston.”

The closest the seniors have made it to winning the state title was back in 2007, when the Lady Eagles finished runner up to Kinston.

“Our eighth grade year we placed second,” Cook said. “It’s just been our goal to get back to that game.”

Every year, the Lady Eagles have a motto they take with them to the state tournament, and use throughout the season.

In 2011, Pleasant Home’s motto is “Making it to state is chunk change. Winning state is big money.”

“That would be money in the bank,” Dozier said.

Red Level almost wasn’t going to hold its spring football game because of the recent deaths in the school’s community,... read more