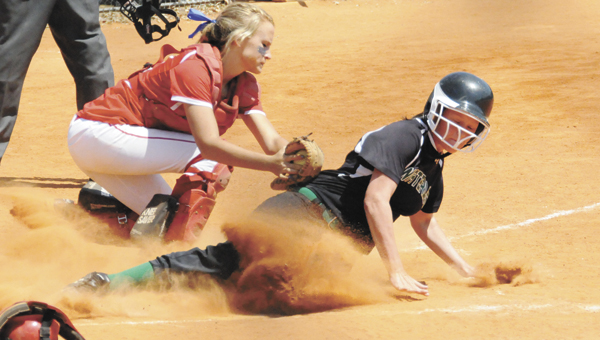 MONTGOMERY — There aren’t many teams that can say they made it to the second day of the Alabama High School Athletic Association’s state softball tournament at Lagoon Park.

PHS head softball coach Bradley Stephens said the team’s willingness to not give up during its last game is a minute representation of how the season unfolded.

“The team’s never given up,” Stephens said Saturday. “That is one of the grittiest team’s I’ve ever coached. I haven’t coached very long, but they were gritty.

After defeating Waterloo 5-0 and falling to South Lamar 4-3 on Friday, Pleasant Home went to work Saturday morning and claimed a 13-3, six-inning victory over Woodville to advance in the loser’s bracket.

In the sixth meeting between Pleasant Home and Kinston this season, the Lady Bulldogs scored two unearned runs and one run to get the win.

Ragland finished as the Class 1A state champion on Saturday, defeating South Lamar 6-3 in the finals. South Lamar beat Kinston 1-0 in the loser’s bracket championship game.

The Lady Eagles finished in fourth place at the Class 1A state tournament, and completed their season 24-18.

Stephens said his first year as the PHS head softball coach was “awesome.”

“I told the girls this was the best ride of my life,” he said. “It’s hard to believe I get paid to do this. You have your ups and downs in coaching, but what job doesn’t have its ups and downs? I love it.”

The Lady Bulldogs took an early 1-0 lead in the first inning on a sac fly by Emily Mock that scored Madison Weeks, who reached on a single and advanced to third on an error.

Kinston added one run in the second inning on another error by Pleasant Home, which would end up being the difference in the game for the Lady Eagles.

Caitlin Jernigan and Abigail Kelley came through for Pleasant Home in the third inning, driving in two runs to tie the game up at 2-2.

Kinston was in threatening distance in the top of the fourth inning, but a play at the plate kept the game tied.

With two outs and runners at first and third, Pleasant Home pitcher Brentin Fuller rushed home where she made the tag on Kinston’s Callie Weeks on a throw from catcher Ashley Copeland.

In the end, Kinston would score its go-ahead game-winning run in the top of the seventh on a fielding error.

Alyssa Caver was 2-for-3 for Kinston.

Pleasant Home needed a good start Saturday against Woodville, and the Lady Eagles got it.

The Lady Eagles soared to an early 4-0 lead after the top of the first inning, and forced the 10-run mercy rule over the Lady Panthers in six innings to get the win and advanced in the loser’s bracket.

Jernigan was 4-for-5 and scored three runs to lead Pleasant Home behind the plate.

Kelley, Woods, Emily Byrd, Kat Dozier and Cook drove in one run each for the Lady Eagles.

Pleasant Home’s four runs in the first inning came on RBI singles from Byrd and Cook, a passed ball and an error.

Woodville answered with its only runs in the bottom of the first inning, scoring three runs on one hit and two errors.

The Lady Eagles added three runs in the fourth inning from a double by Kelley and a single from Woods. Woods scored the third run on an error.

Fuller had four strikeouts and allowed no runs on no hits in three innings to earn the win.

Byrd started the game for the Lady Eagles, and allowed three runs on one hit and struck out five.

The dagger in the heart came for Woodville in the sixth inning after Pleasant Home scored four runs on two hits and two errors.

Woods and Dozier were 2-for-4 each for Pleasant Home, and Kelley was 2-for-5.

MONTGOMERY — There aren’t many teams that can say they made it to the second day of the Alabama High... read more