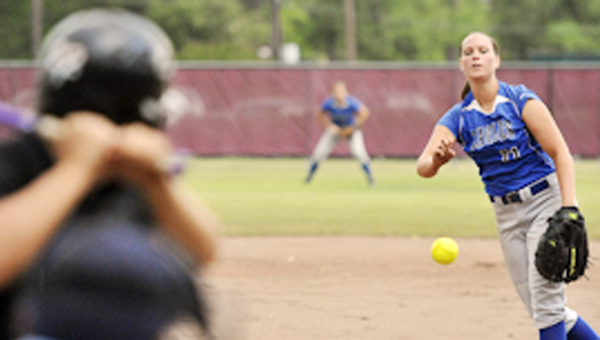 Katy Wiggins learned it takes chemistry and team work to mold a great team in her four years at Faulkner University.

“You can have the most talent ever on a team, but if you do not play well together, then you’re not going to do very well at all,” Wiggins said. “We’d have an extreme amount of talent on the team, and didn’t play very well,” she said. “Then next year, we’d have a reasonable amount of talent, and we’d play well together. It’ll break a team, but it can also make a team.”

Wiggins served as pitcher on the team, and compiled a 6-5 record in her last season at Faulkner.

She struck out 31 batters, while allowing 11 walks — the lowest on the team — in the 16 games she played this season.

Her career stats include pitching in 61 games, 300 innings, having a 2.56 earned run average (ERA) and winning 20 games.

The former Pleasant Home stand out said being able to play softball and keep up with her school work was a challenge.

“That would be probably summed up best as that you had to figure out a lot of time management,” Wiggins said. “I had a bad scheduling conflict that my biology class would be scheduled in the afternoon. So I had to go from class to softball practice, and then when we’d get out of practice at 6 (p.m.) or so, then I’d go eat for 15 minutes and start studying for my classes.

“It was time consuming, and as long as you managed your time well and didn’t goof off that much, you got stuff done,” she said.

While on the field, Wiggins said her best pitch is called a drop ball, where the ball starts at the batter’s thigh and ends up down in the dirt.

There are two types of the drop ball. Wiggins said she pitches an over hand drop ball.

“One of my biggest things is even if you decide to not make as good of a pitch and allowing that walk,” she said. “Usually that would be a better outcome than allowing that walk. There are a lot of times where I knew I threw a bad pitch, and then they’d swing at it and miss it, or pop it up. They have a better chance of swinging at it and hitting it, then you making a bad pitch and getting on base with it.”

Wiggins said she plans on staying in Montgomery for another year before going to graduate school to study physical therapy.

When she suited up for her last softball game at Faulkner, Wiggins said she knew that it was time for the fun ride to end.

“I was fortunate enough to play four more years, and a lot of people don’t get that chance,” she said.

Wiggins is the daughter of Frankie and Sherry Wiggins of Andalusia.

Let’s get this summer started

For many students, last Thursday signified the last day of school until August, but today is the start of summer... read more