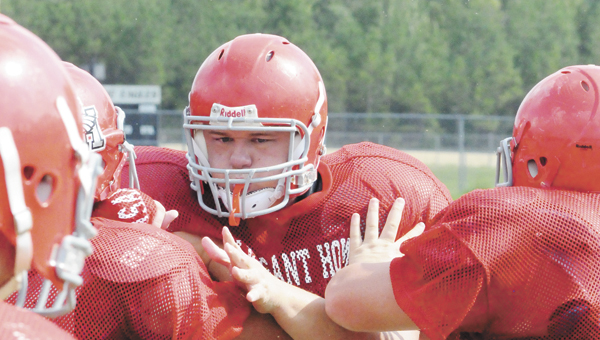 Pleasant Home and Red Level will face off in a preseason jamboree game Friday night to showcase what both teams have worked hard all summer for — a chance to compete.

The jamboree game will consist of both junior varsity and varsity teams playing for two halves each. The JV teams will more than likely play eight-minute quarters, whereas the varsity teams will play the standard 12.

“The JV hasn’t been out there (practicing) too long,” he said. “It’s going to be a little rough on them. We’ve only had them out there a week.”

Douglas said with the varsity team, the game should provide a good “look” for the coaches to help gauge where the Eagles are after this summer.

“We’ve had some decent practices,” Douglas said. “We’ve got some stuff in. It’ll be good to play someone else besides beating on yourself.”

For RLS head football coach Tony Ingram, getting through this game “unscathed” is a top priority Friday night.

Last season, the Tigers came away from the game with a lot of injuries, Ingram said.

“You’ve got to use it for what it’s for,” Ingram said. “You need to use it to look at the kids.

“That means trying to play as many people as you can,” he said.

Pleasant Home’s first regular season game will be on the road at Zion Chapel.

Douglas said a road game for the jamboree will give him an idea what it takes to get ready for road games this season.

“It’ll give us an idea about travel, and as far as the little things, what you’ve got to do to get ready for a game,” he said. “That’ll be important getting all of that type of stuff lined out.”

Ingram said for the past two weeks, he’s been anxious to see what the team will look like, given the fact that the Tigers haven’t had the opportunity to have a scrimmage because of the low numbers on the team.

“Before, you went down hill (from our locker room) for weeks to practice,” Ingram said. “Usually, it’s the ones versus the twos, but like us, it’s hard to have a full scrimmage.

“This game gets you a chance to look at your kids against starters from another team,” he said. “They want to play somebody else. There are a lot of benefits to this.”

In addition to a good “look,” Douglas said he’s interested in seeing how the players handle the “speed” of the game.

“Basically, I’d like to see how well they move and get to the football,” he said. “We have a lot of young kids, and we’ve got some freshmen and sophomores that haven’t played in a varsity game. So,we’re trying to get them acclimated to the speed of the game, which is a little bit faster than junior varsity.”

Additionally, Ingram said his kids are excited about the game Friday night.

“That’s what you work for all summer — to tee it up with somebody else,” Ingram said.

“They’re excited,” Douglas said. “Again, fall practice is always tough. It’s so dang hot out there. This is what you get ready for — to play and compete.

“They’re excited about going up there, and competing with Red Level,” he said.

Tomorrow night, Opp head football coach Jack Whigham will finally get a good look at his team as the Bobcats... read more