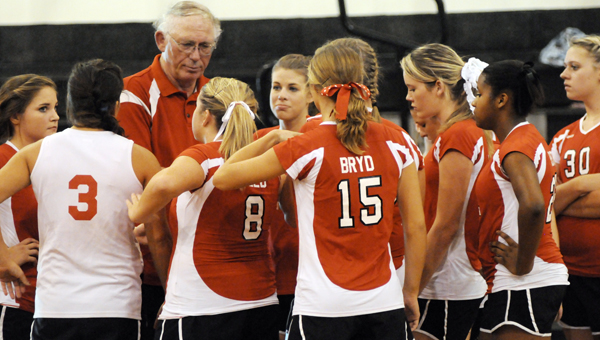 Pleasant Home swept Red Level 3-0 Thursday night. The Lady Eagles came back from a 9-20 deficit in the second game, and won 26-24. | Andrew Garner/Star-News

Trailing 9-20 in the second game, Pleasant Home launched an 8-0 run and beat Red Level 26-24 to take a 2-0 lead, and the Lady Eagles went on to claim a 3-0 victory over the Lady Tigers Thursday night at RLS.

“That’s tough to come back like that,” PHS volleyball coach Jerry Davis said. “You just can’t make mistakes. When you get down like that, you can’t make any mistakes.

“Give them (Red Level) credit,” he said. “They played well there.”

Pleasant Home cruised through the first game with a 25-9 win over the Lady Tigers.

In the second game, the Lady Tigers took an early 6-2 lead and never looked back, going on a 6-0 run forcing the Lady Eagles to take a time out.

RLS and PHS traded points back and forth midway through the second game.

Davis said the girls made some mistakes to get themselves in that “hole” late in the game.

“We had that second game and let them come back on us,” RLS coach Sabrina Tolbert said. “They’ve got to really learn to play their positions a little better. We’ll get a little better after practice, and get better next week.”

The Lady Tigers regrouped, came out in the third game and took a 3-1 lead early.

However, Pleasant Home came out after taking the in-between break outside for a talk, and muscled its way through the third game, holding Red Level to single digits to win 25-8.

Pleasant Home will travel to play Florala next Mon., Aug. 229, in an area match. Junior varsity will kick off at 4 p.m. Then on Tuesday, the Lady Eagles will host Elba for a three-team match, beginning at 4 p.m. The junior high team will start.

Andalusia’s offensive and defensive lines collide during a recent practice. | Andrew Garner/Star-News It may take two to tango, but... read more