RLS switches back to ‘I’ 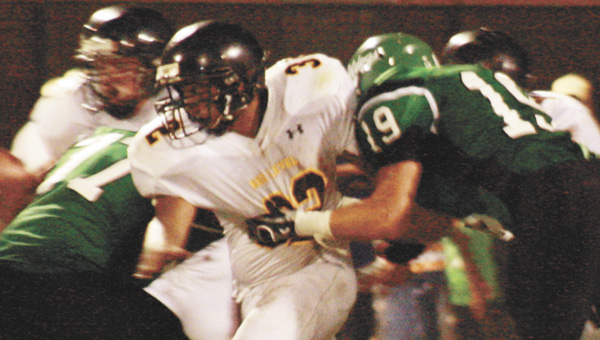 Red Level will play host to Calhoun this Friday night in a region contest. | Kendra Bolling/Star-News

Red Level has brought back the “I” formation into its offense, head coach Tony Ingram said Monday.

The Tigers utilized the old formation last week in their 19-12 loss to region opponent Goshen, but Ingram said he saw a change in the team.

“Friday night, they were a completely different team,” he said. “They had absolute, all out effort. The execution looked good.

“If we get the effort and execution going, then we’ll be all right,” he said.

The Tigers will play host to Calhoun at home this Friday night at Bobby Dye Field.

“They have athletes everywhere,” Ingram said. “They haven’t had a lot of success, but they’re very dangerous.

“I don’t care what their record is and has been in the past,” he said. “They’ve got athletes and speed. It’s a deadly combination.”

Like Red Level, Calhoun enters this week’s contest without a win this season.

This week at practice, Ingram said the team will be working on one important thing.

“It’s execution of our plays with our offense,” he said. “We trimmed it down to doing the simple things.

“We’ve done it (the “I” formation) before,” he said. “Not that I think (the running offense) was a bad offense, but we weren’t controlling the ball. We were always going three and out.”

When asked what the morale of the team is like, Ingram said it’s “very good” considering the circumstances.

“I couldn’t ask for anymore effort,” he said. “I don’t know if I’ve ever seen a bunch play as hard as Friday night come up short.

“I think they’ve seen what they can do,” he said. “If you go all out most of the time, good things are going to happen.”

Additionally, Ingram said he’d like to thank the crowd for coming out and supporting the team last week.

“They were amazing,” Ingram said. “They were into it from the start to finish. When you lose two like we’ve lost, you don’t know what you’re going to get.

“They were vocal and on their feet,” he said. “We need them again Friday night.”

Injury update: RLS senior quarterback Troy Nolen has a fracture in his throwing arm. Ingram said he is week-to-week.