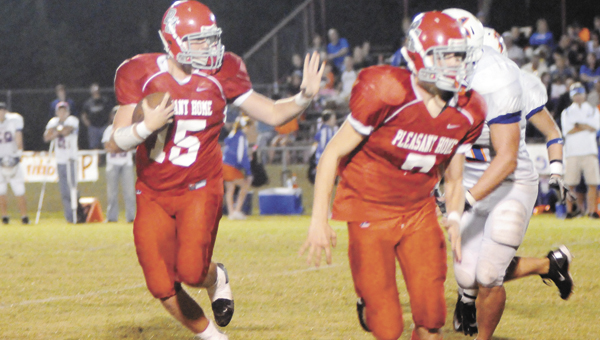 Pleasant Home’s Gabe Gunter (15) will face a Brantley defense that had a pick six during the Bulldogs’ 19-0 win over Luverne last week. | Andrew Garner/Star-News

Pleasant Home and Brantley will face off in a region battle this Friday night at Bulldog Stadium to determine who will still be undefeated in Class 1A, Region 2.

The Eagles and Bulldogs enter this week’s region contest with identical region records at 3-0.

Pleasant Home has recorded one loss so far this season, while fourth-ranked Brantley is still undefeated this season.

PHS head football coach Ronnie Douglas said this week’s game is a “big” one for both teams.

“It’s a real big game for Pleasant Home,” Douglas said. “The kids are really excited about going over there and playing them.”

The Eagles capped off three straight weeks where they have won by the same score at 14-13. Pleasant Home beat Samson, a Class 2A opponent, last week.

However, Brantley took advantage of some Luverne turnovers last week, and ran away with a 19-0 shutout win over the Tigers.

“The region implications are huge in this game,” Lowery said.

During the course of the season, Pleasant Home has utilized its size up front, mainly on the offensive and defensive lines.

Lowery said there’s no real way to get prepared for that type of attack when Pleasant Home’s players are bigger than his.

“Obviously, they’re very big up front,” he said. “We’ve watched them on tape, and of course, from playing them year after year, you recognize a lot of their names and a lot of their kids.

“I don’t know if you can get ready for that,” he said. “We don’t have a practice squad that’s that big that we can work against. I think we’re going to have to adjust as the game goes along, and we’re just going to have to work on being real fundamental, and trying to stay low and work on each and every position to try and combat their size.”

Brantley has some weapons on both sides of the ball as well.

Running backs Andrew Parker and Zach Wiley scored one touchdown each for the Bulldogs last week.

On the defensive side, defensive back Taylor Tew added a touchdown on a pick six.

“That wasn’t good either,” he said. “We had 12 penalties and three turnovers. You’re proud of the win, but there are things you can certainly get better at.”

“We’ve got to play assignment football and try to get our kids to do their job,” Douglas said. “Our job as coaches is to put them in position, and their job (as players) is to make plays.”

Pleasant Home and Brantley have met 11 times, and the Bulldogs hold a 10-1 record over the Eagles.

But, right now, Douglas said the team’s focus is on “one game at a time.”

“We always take the approach with our kids that if we go out there and play our best and do your best, then, you don’t ever have to look at the scoreboard,” he said. “If you play your best, you can hold your head up. You want them to perform their best, and what they’ve been coached to do. Then, they can always hold their head up because they know they’ve done their best and that’s all you can ask for them to do.”