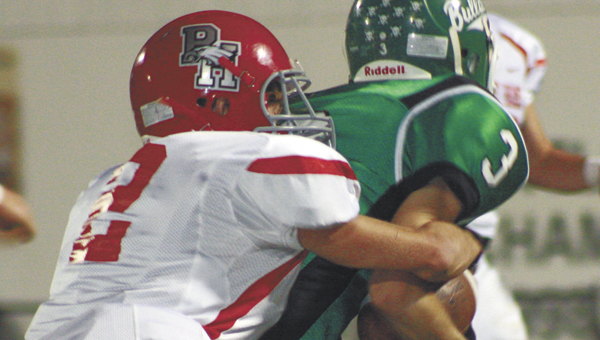 “It’s very important,” Douglas said. “We have got to get a win here. It really starts Friday night with the way it’s lining up.”

Douglas said he thinks the Eagles already have a berth in the Class 1A state playoffs with the way everything is playing out.

Pleasant Home won its first three region games in the first half of the season, and only has three region contests in the second half due to an open date.

Douglas said the team is aware of what needs to happen to try and get a good seed in the post season.

“You’d like to get that second seed,” Douglas said. “That puts us having a home game in the playoffs. It’d be nice to get that fifth home game for us.

“The next two games — against Georgiana and Geneva County — we’ve got to win both of them,” he said. “If we lose both of them, we may even drop down to the No. 4 seed.”

Georgiana enters this week’s contest with one win so far this season. The Panthers’ only win came against Florala, who hasn’t won a game this season.

Georgiana’s Rickey Everett, De’Kendre’ Binion and Adrian Rich are three of the better athletes in the region the Eagles will face, Douglas said.

“He throws the ball pretty good,” he said.

The Panthers will present the Eagles a similar look on offense, mainly lining up in the spread formation.

“McKenzie runs sort of something similar to what Georgiana runs,” Douglas said. “They’re (the players) real familiar with that.”

Douglas said those were the result of the Bulldogs covering the pass well.

“They had better hands than we did,” he said.

After this week’s game, the Eagles will have an open week, and will use the extra practice time to get ready for Geneva County on Oct. 21.

Kick off in Pleasant Home is at 7 p.m.

Johnson reacts on the nickel