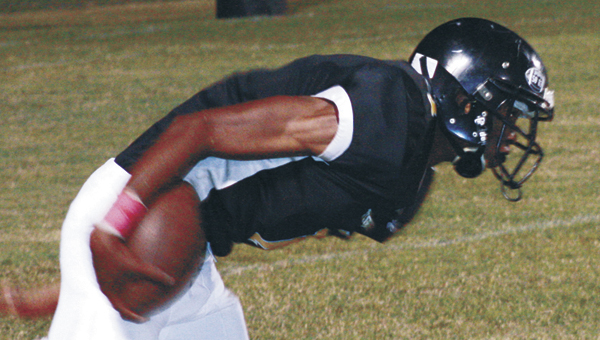 Red Level will face No. 1 Elba this Friday night in its last region contest of the season. | Kendra Bolling/Star-News

Red Level head football coach Tony Ingram knows just about as much about top-ranked Elba as anybody.

That’s because every week when he has looked at film to get ready for his team’s next opponent, Elba’s been on the screen.

“I’ve been watching them for weeks,” Ingram said. “Every time I watch them, they get better. They’re scary good. I don’t see a weakness anywhere.

“They’re athletic, and fast, oh my goodness, are they fast,” he said.

Ingram said the dominance on Elba isn’t just from one player, but several.

Burks has rushed for 428 yards on 34 carries, and scored two touchdowns on the ground. In the air, he has added 454 yards on 13 receptions and six touchdowns.

Additionally, Ingram said Elba’s junior quarterback Austin Johnson will be the best Red Level (1-7, 1-2 in Class 2A, Region 2) has seen.

“He’s good at running and throwing,” he said. “So, they’re not one-dimensional by no means.”

This season, Johnson averages 149.9 passing yards per game, and has racked up 18 touchdowns in the air.

Ingram said in order to show that kind of defensive effort, he hopes the players keep Elba’s offensive weapons in front.

While watching film on Elba throughout this season, Ingram can say, without a doubt, that there are no weaknesses, and his team will have to play a flawless game tomorrow night.

“They’ve gotten consistently better since the first week,” Ingram said. “We have to maintain drives and keep our offense on the field. Those three-and-outs — you can’t do that.

Kick off at Bobby Dye Stadium in Red Level is at 7 p.m.

Tigers to tango with Yellow Jackets

Straughn may be out of the playoff hunt, but the Tigers aren’t giving up, head football coach Trent Taylor said.... read more