Before long, the peace and quiet won’t be quite as peaceful, as a flock of RVs will make their way to that campground and others in the area, all of which are booked solid for the upcoming Memorial Day weekend.

“It’s close to home and we like the park ranger (Thom Watson),” Ballard said.

Memorial Day, which will be on Monday, is a day to remember those who died during active military service. The holiday is usually observed on the last Monday in May. But it also is the unofficial beginning of summertime travels.

Don Mathis, manager of the new Cypress Landing RV Park and Campground in Gantt, said in addition to this weekend, he expects the July 4 holiday to be busy as well.

“I think July 4 is one of the biggest holidays as far as camping there is,” Mathis said. “That’s when families take vacation and things of that nature. Of course, Labor Day is the day for the last hoorah. That’s big, too.”

Cypress Landing co-owner Clifton Hall said he does have a few spots open for those who are looking to set up their RVs.

“We really haven’t booked as many as we thought we would,” Hall said.

Hall said the campground recently added two cabins to its property, and the big hold-up is getting a permit for the boat landing.

Mathis said the cost to stay at Cypress is $35 per night and $450 per month. Additionally, the park is associated with Passport America, which allows members to camp at half price.

Watson said there are no spots available for RVs at the Sweet Home park.

When asked if it is common to be booked solid on holiday weekends, Watson said it is.

“Yeah, for Memorial Day it is,” Watson said. “It’s that way for most holiday seasons, and some weekends during the summer. It just kind of depends.

“I’ve already had about five calls (Wednesday) morning and 20 this week,” he said. 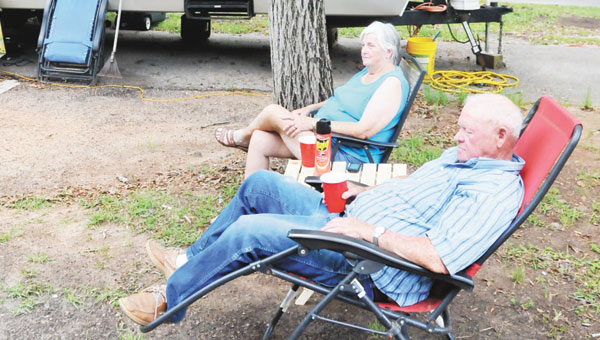 Shown are Vernell Berry and Barbara Ballard, who are camping at Sweet Home Alabama Campground and RV Park on Pt. A.

Watson said reservations for spots at the park were taken as far back as a year ago.

“This time, it’s been about two weeks since we’ve been booked solid,” he said. “I thought that with school getting out this week and next week, that that might mess things up from our side, but it didn’t.”

Watson said he hopes the school systems go back to last year’s schedule, where school ends before the Memorial Day holiday. Locally, Andalusia and Opp classes are ending this week, but county schools will complete the school year next week.

Watson did say that primitive sites with no hook-ups are available at the campground.

With the state threatening to close some state parks, including Frank Jackson and Florala State Park, Frank Jackson Office Manager Shelby Scott said he doesn’t know how they could close with the amount of business that comes through every holiday weekend.

Scott said the park is slam full for the weekend.

“Friday and Saturday it’s going to be packed out,” Scott said. “July 4 is looking booked already, too.”

Scott said the best people can do for reservations is to call three weeks to a month in advance.

“It’s best to make a reservation at least a week in advance, and for holidays, three to four weeks in advance,” he said. “Every holiday is slammed full. I don’t see how they would want to close something that stays full all the time.”

Mendy Carroll with Florala State Park said they are taking it day by day, and added that the park is full this weekend.

“I don’t know why they would close the park unless they put a fence around it,” Carroll said. “As of now, we’re going and doing our daily business. Come out and visit us.”