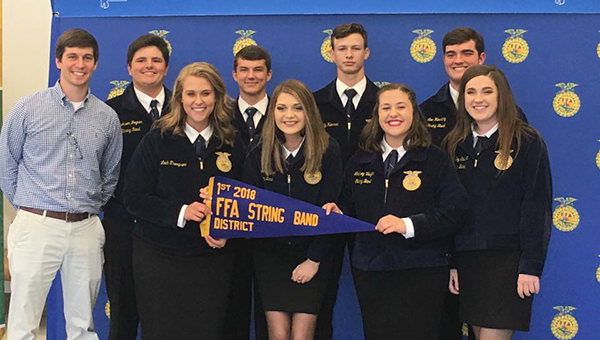 After winning first place in the district FFA competition, the Straughn String Band hopes to raise money to get members of their quartet to the state competition.

“The Back Porch Concert has been an annual fundraiser for a few years now,” Taylor Weeks, the band’s director said.

The concert will be at the Straughn High School’s back porch from 6-9 p.m., today.

“It’s a major fundraiser for the group and this year it will be mostly used to pay for travel costs and hotels for the state competition in Montgomery,” Weeks said.

This is Weeks’ first year as the band director of the string band.

Weeks, who also teaches social studies, says he’s told the students the importance of music and the potential for a bright future.

“Music and arts last a lifetime where other things don’t. Music can also earn scholarships,” he said.

Weeks said he loves teaching and sharing music with the students.

“We have some very talented students in the band,” Weeks said.

“There are 14 in the string band and then we have the eight students that are going to the state competition.”

“I know they’ll do well in the competition, I have every bit of confidence in them.”

Coming to the concert will benefit the children, Weeks said.

“It’s going to be great music and it’s not just bluegrass, I let the kids choose songs as long as they were school appropriate,” he said.

“For example, we will be performing ‘Famous’ by Mason Ramsey, the Walmart yodeling kid.”

Weeks said they tried to open it to more genres, including rock.

Besides the string band, there will also be the Bethany Praise Band and an alumni string band performing.

“It’ll be a great time to support students that will go on to represent Covington County,” Weeks said.

“It’s $2 to get in and that’s paying for a good time. There will be hotdogs, homemade ice cream and peanuts available as well.”

There will also be door prizes, games for kids and more.

In the event of rain, Weeks said the concert will be held in the Straughn High School’s gym.