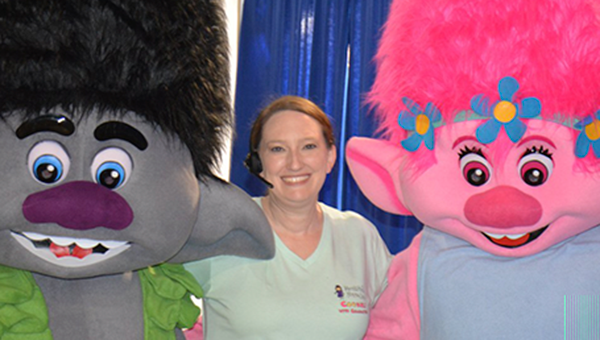 Kiley Spears is shown with two of the characters at Cookies With Characters, the annual fundraiser for Meredith’s Miracles. After years of volunteering, she is now the executive director. Courtesy photo

A local real estate agent has become the executive director of Meredith’s Miracles.

Kiley Spears is both a Caldwell Banker agent and the executive director of the non-profit organization that benefits children and young adults throughout the Southern region of the state.
“I would say I’m pretty good at multi-tasking,” Kiley Spears said.
Spears has been in charge of fundraising for Meredith’s Miracles since 2006.

“I got involved when I suggested the idea of Cookies with Characters to the founders of Meredith’s Miracles,” Spears said.
“And they were kind of like, ‘That sounds great, can you do it?’ ”

It’s all about helping families, Spears said.
“It’s really so amazing how much money we raise and how many families we help,” she said. “It’s very rewarding to be involved.”
As the new director, Spears hopes to work hard on networking as well as updating technology.

“We’re going to work hard on networking with doctors and social workers within the 26 counties we cover,” she said. “I’m also hoping to update the technology within Meredith’s Miracles.”

Spears plans to do that by linking the office phone number directly to her personal phone.
“I will be available most of the time through the new system that directs phone calls to my own phone,” she said.

From working with Meredith’s Miracles, Spears was introduced to Megan Kelley.

Meredith’s Miracles helps families in need when medical emergencies are presented for children, from birth to 18. The Megan Kelley foundation does the same, but for people ages 18 to 25.

“Because sometimes children have ongoing medical issues but we can’t help them past 18 with Meredith’s Miracles,” she said.

To Spears, this is just another opportunity to help others.

“For about 12 years, I’ve worked closely with Meredith’s Miracles, but I’ve never worked on this side of it,” she said.

“I know that I have big shoes to fill from both Emily Yehling and Laurel Tisdale, but I’m excited to take this on.”

For those in need, don’t be afraid to reach out for help, Spears said.
“Some people feel bad about receiving help from someone else,” she said.
“They shouldn’t feel bad because medical bills take a toll. Don’t be afraid to ask for help.”

Spears is a native of Andalusia. She and her husband, Paul, have two children, Dalton and Keaton.

When she has time, she enjoys painting and spending time with her family.